Hit enter to search or ESC to close

Driven by a burning platform to serve legal departments, better, faster and cheaper, LegalTech adoption by BigLaw firms has fuelled the explosion of LegalTech firms in our $23 billion Australian legal industry. However, Catalyst, a US-based venture capital firm, estimated that LegalTech adoption currently sits at around 20%. There is clearly opportunity for growth which will continue to help shape the changing legal services ecosystem.

Australia’s LegalTech market is unique in the Asia-Pacific region, in that, we have a strong grassroots movement of technologists, lawyers and entrepreneurs bringing new solutions to life. This grassroots movement gave birth to Legal Hackers chapters and The Legal Forecast across the country.

Australia shares many common traits with other common law legal systems and just as overseas LegalTech firms target the Australia market, there is equally the potential for Australia to become a vibrant exporter of LegalTech solutions. Australian law firms and corporate legal departments who become early adopters can become experts and influencers in their organisations’ global practices and offices.

The launch of the Australian Legal Technology Association (ALTA) in 2018 is a marker of how far the LegalTech sector has developed, now representing over 50 home-grown LegalTech firms.

LegalTech in Australia can trace its origins back to 1988 when LawMaster, a legal practice management solution provider was founded. It wasn’t until cloud computing became mainstream in the 2010s that we saw LegalTech startups mushrooming in Australia as LegalTech solutions became more easily implemented and adopted.

This timing coincides with several factors at play:

These factors combine to contribute to the explosion of Australian LegalTech in the 2010s, achieved largely without any supporting ecosystem of dedicated LegalTech events, organisations, education programs, accelerators, or angel / venture capital (VC) funds. With that ecosystem starting to emerge, the next decade looks set to see significant, growth in Australian LegalTech. 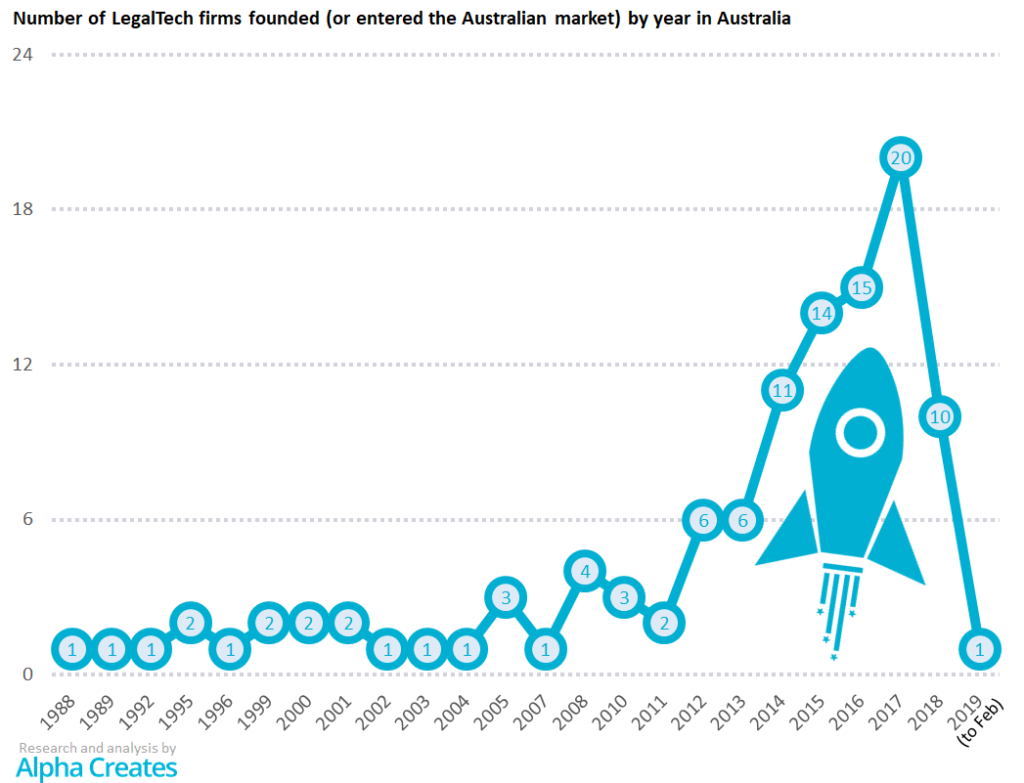 Our research reveals that the business to business (B2B) sector is most mature while the business to consumer market (B2C) is nascent. This trend can also be observed in the UK, as documented by The Law Society’s paper on LawTech adoption in the UK. Unsurprisingly, the majority of Australia’s LegalTech solutions are focused on the B2B market of law firms (58) and corporate legal departments (35) as their primary customer segment. Only 16 LegalTech firms are focused on the B2C market. 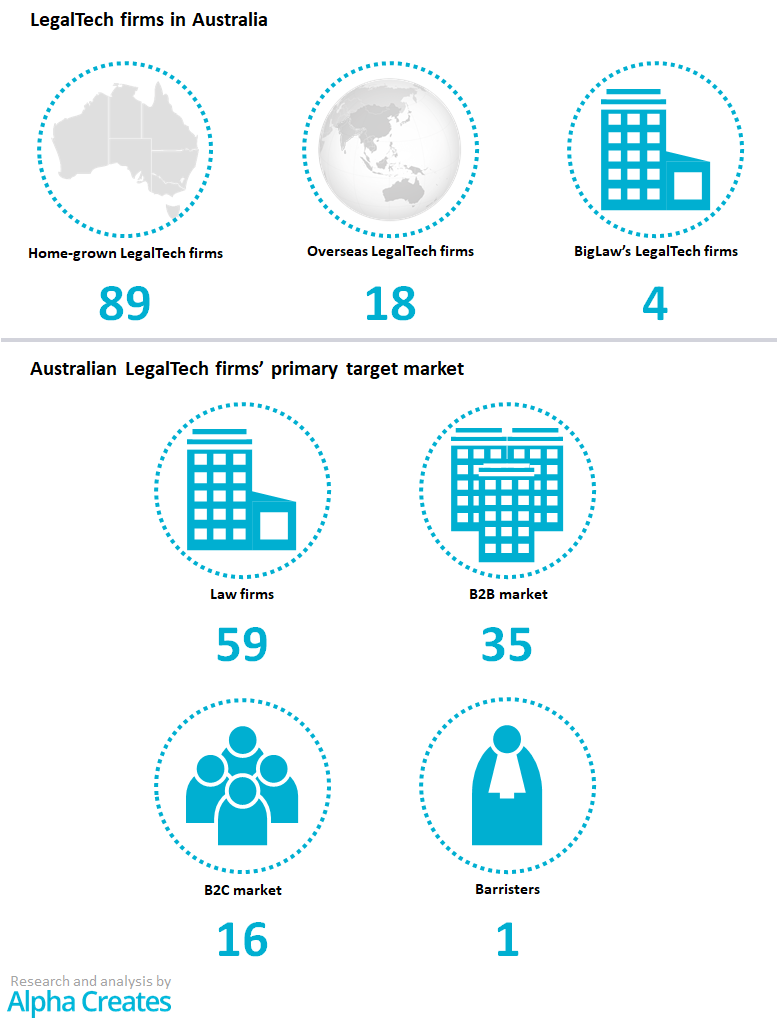 For this paper, we have also analysed LegalTech firms in Australia whether they are home-grown, overseas headquartered or owned by a law firm. Our research reveals there are 88 home-grown organisations, 18 are from overseas and 4 have ownership ties to a law firm.

Understanding how these 111 LegalTech firms fit into the market can be daunting however there are some groupings that can be made to help understand the breadth and pain point each of these firms address. The breakdown of LegalTech firms below is by their primary solution, noting that some like Thomson Reuters and LexisNexis sell multiple solutions and cross solution boundaries. 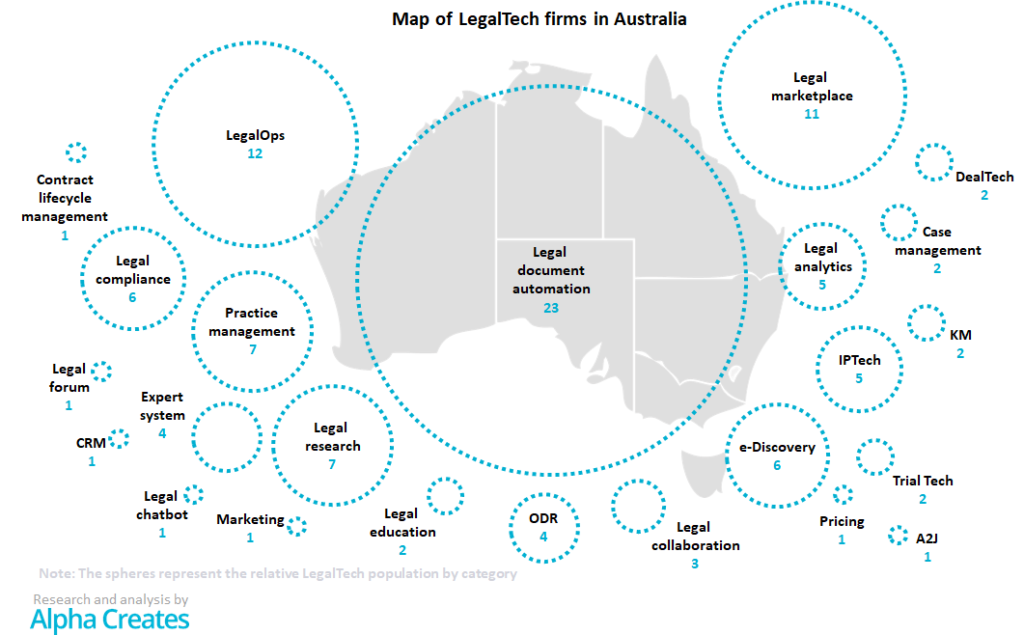 The largest cluster of solutions is in document automation (23 firms), LegalOps (12 firms) and Legal marketplaces (11 firms) followed by a substantial grouping around segments like legal practice management (7), research (7), compliance (6) and e-Discovery (6).

Australian LegalTech firms have access to a range of funding options from grants, accelerators, crowdfunding, angels, venture capital (VC) funds, private equity, debt and corporates. Each form of funding comes with its own benefits and disadvantages however there is usually a certain progression: 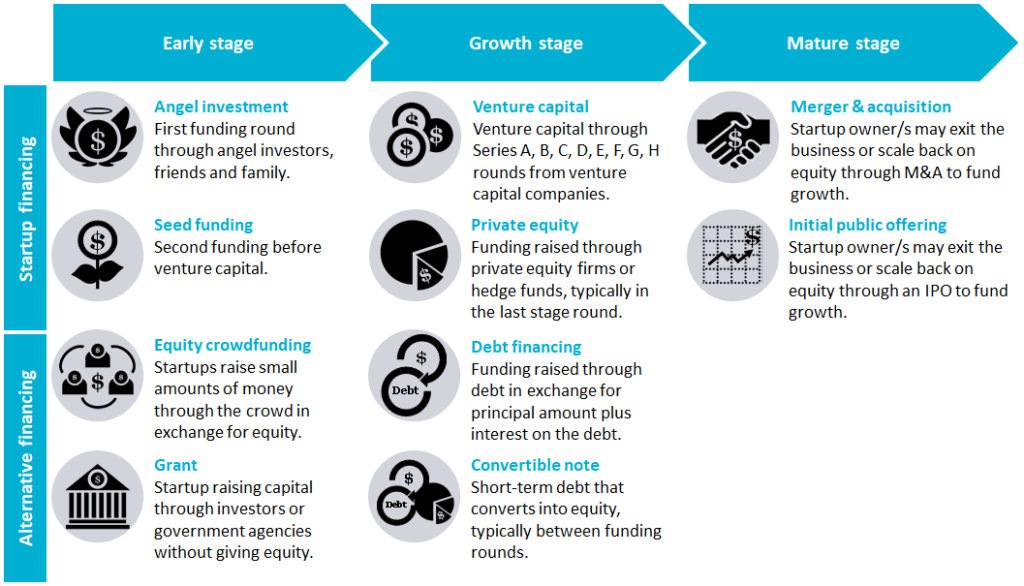 At different stages of the journey, different attributes are important to attract capital:

In any case the focus on the market, team and product is no different from any other areas of investment. Funders are trying to assess the relative reward / risk equation and compare it to other opportunities both within and outside the sector.

We gauged funding to LegalTech firms in Australia by researching publicly reported funding deals. The research traced $367.85 million in funding raised through 49 funding deals. Unsurprisingly, most of these were raised in the US and UK markets where more willing investors and investment capital are readily available. Unlike these markets, funding for LegalTech in Australia has historically been modest. 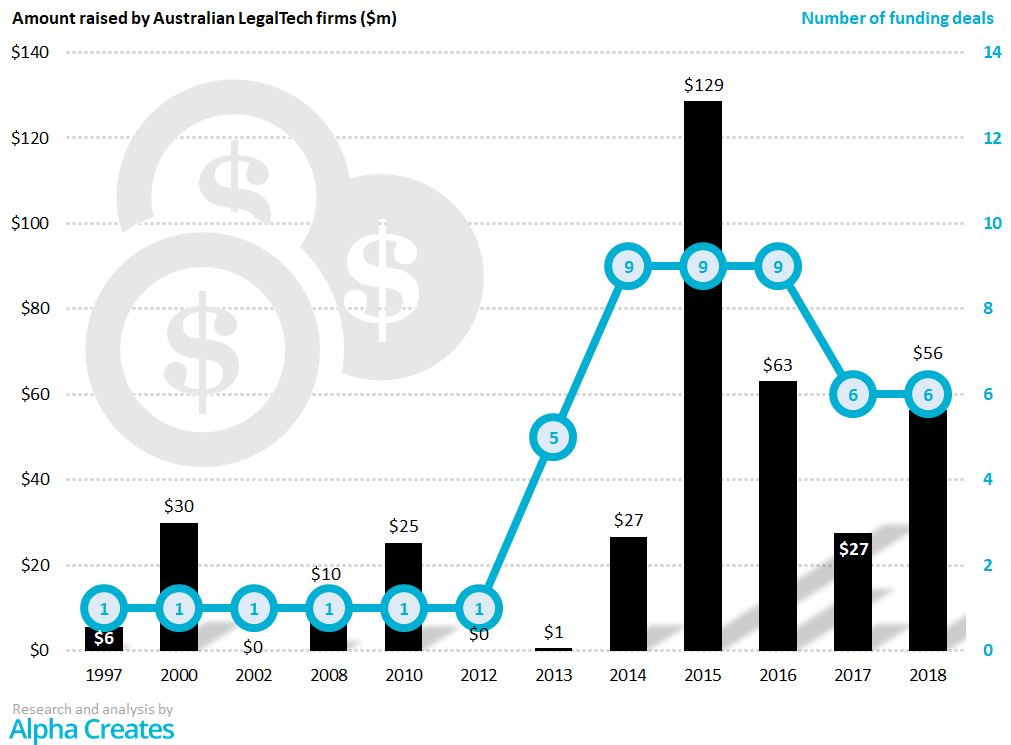 A breakdown of the funding data reveals the biggest raises have been supported by venture capital ($258.25m), private equity ($75.2m) and debt funding ($24m). This not surprising as the businesses that have been in operation for a decade or more and have achieved significant scale by selling into local and international markets. 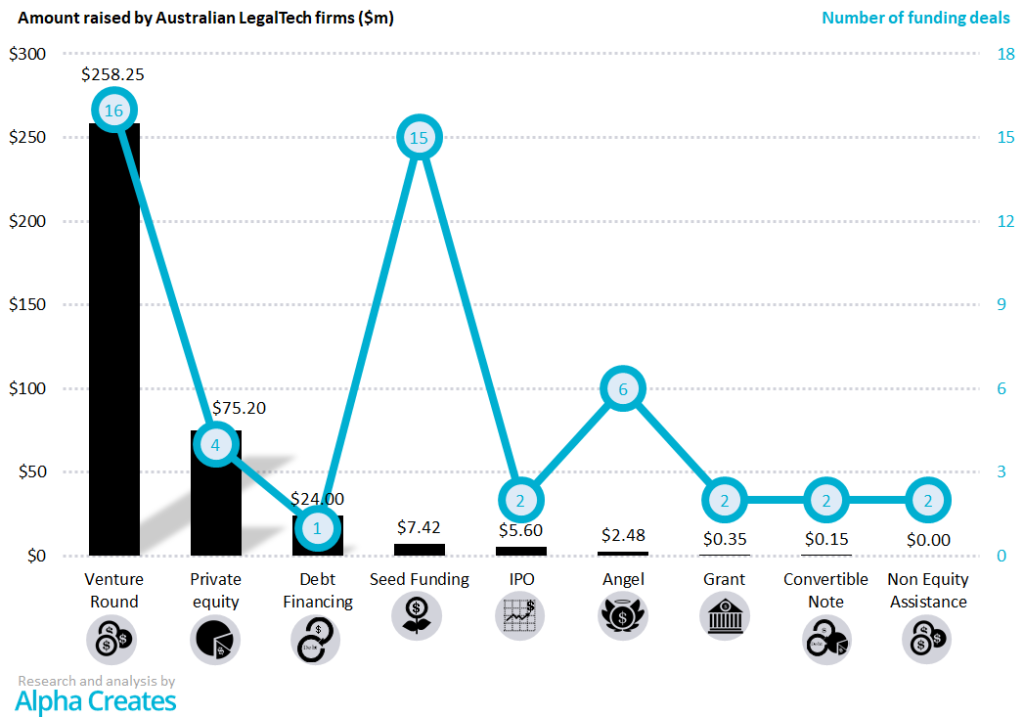 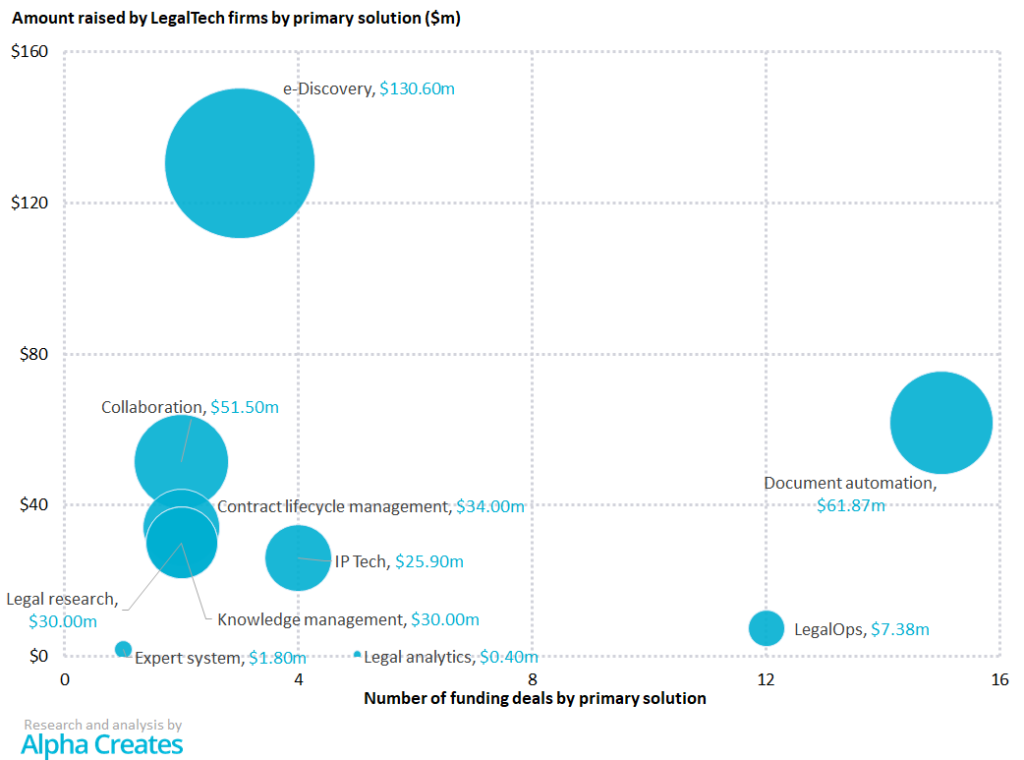 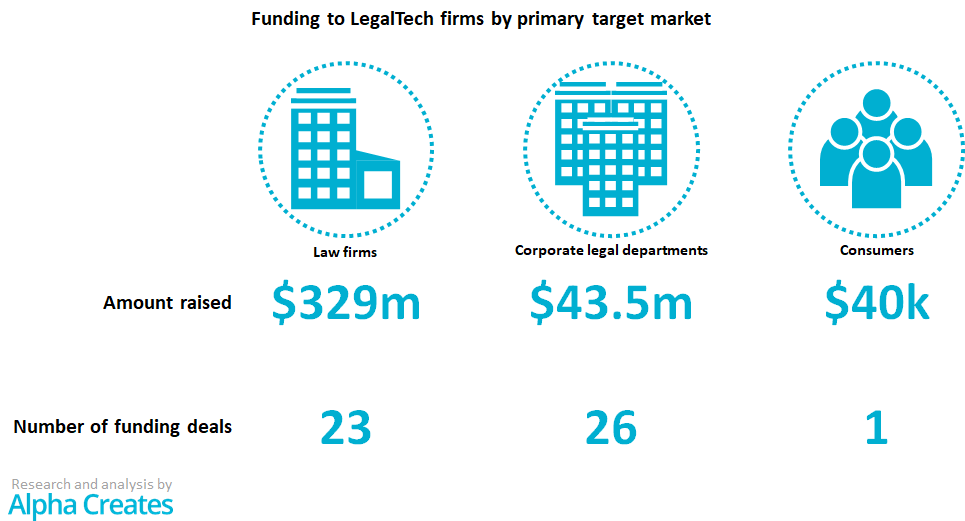 We were able to breakdown when the LegalTech firms’ first funding occurred after they were founded. Removing outliers like CPA Global (68 years), LexisNexis (30 years), NetDocuments (15 years), HighQ (15 years) and Relativity (14 years), the average years between foundation of the LegalTech firms and their first funding deal occurred at the 2.73 years (or 3 years) mark. 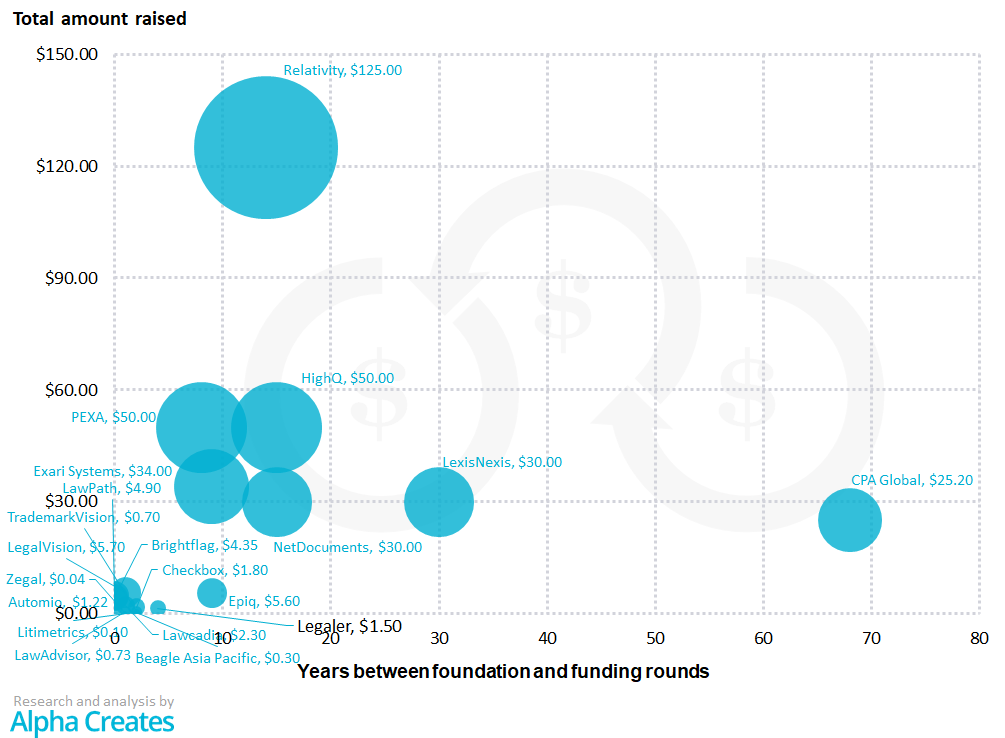 The art of raising LegalTech capital 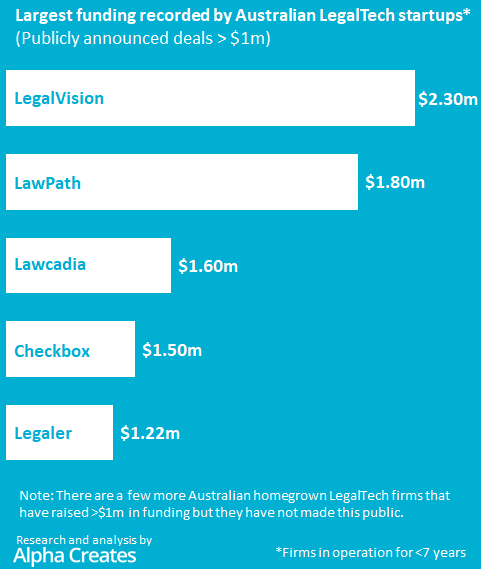 Attracting early stage funding can appear to be a dark art however more start-ups are navigating that maze and beginning to catch the eye of later stage funders. This is partly a function of more available capital in the Australian market and partly the increasingly sophisticated support network that provides encouragement, networking and can lower the cost of launching a company.

Not all potential funders are solely motivated by profits. Government grants often aren’t so return focused, debt funding is an exercise in primarily protecting the capital deployed and corporate investors (like law firms) may have other strategic aims they are trying to achieve which can be fulfilled rather than seeking an exponential return on their investment from a sale of the business.

There are some common barriers to attracting capital for a LegalTech business:

None of these factors are insurmountable but an understanding of the overseas LegalTech financing sector can be helpful. For example, in the US, DocuSign ($8.6B) and LegalZoom ($2B) have created LegalTech unicorns; US ‘smart money’ VCs are providing significant funding for new approaches; and there are at least a dozen companies that have secured over $20M in funding over the last few years. There is also a long history of legal service innovation and some significant players in the market who have a history of acquisitions including Thomson Reuters, Wolters Kluwer, LexisNexis and Epiq. Locally, TrademarkVision was sold in 2018 to a strategic investor and represented a positive return for local VC investors including Right Click Capital and Scale Investors.

To achieve a high valuation, generally a range of factors have to be present:

Underlying this is that the investor today wants to know that in the next year or two the company will grow into the valuation such that a future investor will pay an increased valuation, allowing today’s investor to ‘mark up’ their valuation. The most significant factor driving valuation is revenue growth which is tightly linked to sales and marketing capability.

Most recent LegalTech companies that have only been angel funded have not yet had significant rigour applied to their valuations (cf. Tempus Partners’ investment in Ansarada). There are however benchmarks particularly in the US related to the growth rate and scale of revenues of software as a service (SaaS) based companies that can be drawn on in many cases. There are several deals in the market approaching $1M in annualised revenue that are likely to set those benchmarks with emerging VC interest in the sector.

Getting an investment is fundamentally about trust. Trust is built over time based on establishing rapport and showing over time that you deliver on your promises. Depending on which side of the table you are on, you will often have threshold issues that need to be addressed. 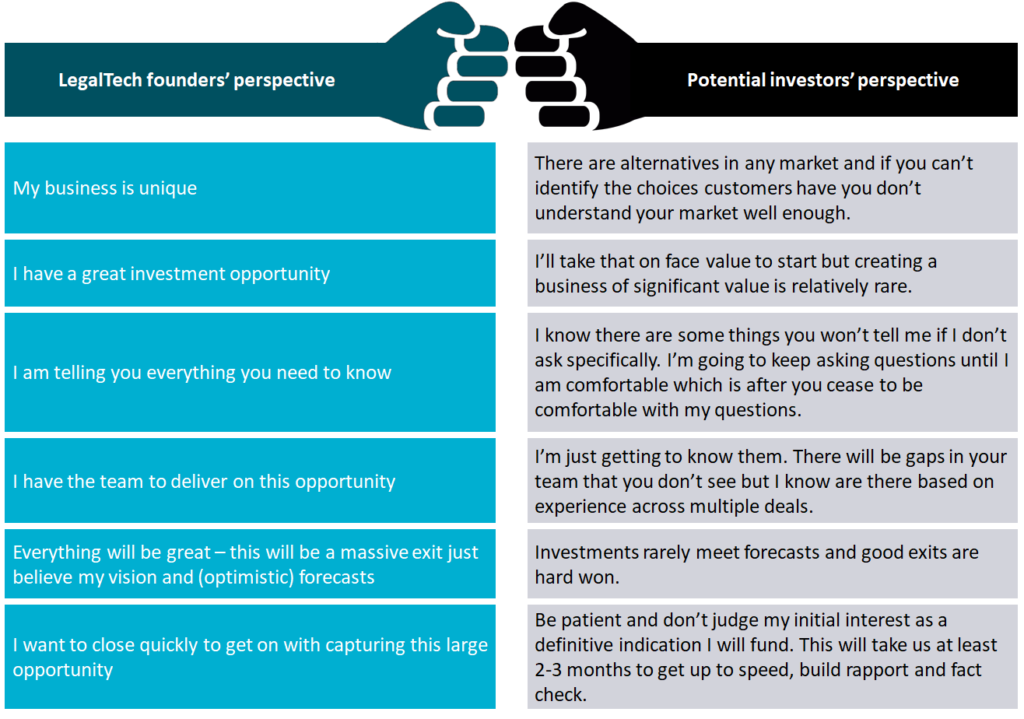 3 Market opportunities for LegalTech in Australia

That fact that much of Australia’s LegalTech sector has developed without a dedicated ecosystem (e.g. LegalTech-focussed events, organisations, accelerators, or angel / VC funds) points to an opportunity for both those who can provide that infrastructure, and more importantly the founders of the future who can benefit as those support structures develop.

ALTA, The Legal Forecast, Legal Hackers (Australian Chapter), The College of Law Centre for Legal Innovation are recent examples that have been established over the last two years. There still lies a significant gap for an Australian LegalTech accelerator (Mills Oakley accelerator took one cohort in 2016/17 only) and the recent call for applications for the Lander & Rogers LawTech Hub is a promising development. Also missing is a specific LegalTech-focused fund or angel network, with the latter holding huge potential given the large pool of high net worth investors in law who have the money to invest, but lack the market visibility, curation and efficiencies that angel networks can provide.

Outside legal document automation and legal marketplaces, Australian LegalTech firms face very little local competition, especially from next generation, emerging LegalTech firms. Practice management, legal analytics and knowledge management are a few examples where a large market potential exists with very few, new local entrants. Unlike in the US or UK, there have been no significant, home-grown players emerge that primarily leverage artificial intelligence or blockchain technology.

Australia’s cultural alignment to significant, English-speaking markets such as the US and the UK give us a competitive advantage in the region when exporting home-proven LegalTech to those markets. An expansion to the UK, for example, requires little (if any) product or operational changes to cater to that market, given the almost identical legal systems, market dynamics and culture. While the US legal system and regulatory regimes are different, market dynamics are similar and a more mature, entrepreneurial culture can provide a less-resistive path to accessing and acquiring a larger pool of clients who are more experienced buyers of emerging technologies.

3 Market challenges for LegalTech in Australia

Like in most industries, the total addressable market within Australia for LegalTech firms is likely to be too small to attract significant, follow-on VC funding (beyond series B for example), unless the product is able to be exported internationally, especially to the US ($275 billion market). For a LegalTech firm to achieve unicorn status (valuation of over $1 billion), it must capture significant market share globally, across different legal systems.

Australia’s IT talent shortage is a widespread issue across all sectors. Given these and related skills in product and design are rare among lawyers, LegalTech firms will continue to find it challenging, at least in the short to medium term, to source the technical skills required.

Policies, incentives and pathways to promote the growth of Australian startups, including emerging LegalTech firms, have fallen behind our international peers in some areas. Some examples of where Australia has been late to implement and/or adapt policy settings to promote innovation in the digital era, include:

Peak bodies such as ALTA have an opportunity to represent the collective voice of Australian LegalTech and join forces with other associations such as StartupAus and FinTech Australia to advocate on such issues on behalf of their members.

Like other professional services areas software will continue to eat the world and new business models disrupt traditional practices and relationships. The legal services market is not immune to the broader changes in the market or forces such as globalisation, digitisation, automation, the changing nature of work and employment, and artificial intelligence.

The legal market will survive these changes but will be transformed. The opportunity is to get ahead of those changes, understand them and become early masters of the tools to drive competitive advantage and efficiency. One is reminded of the old Latin proverb: Audaces fortuna iuvat (Fortune favours the brave).

This paper is a collaboration between Ben Armstrong (Earendil), David Bushby (InCounsel) and Eric Chin (Alpha Creates). The research presented in this paper are based on publicly available data of Australian home-grown and overseas LegalTech firms with an Australian office presence. 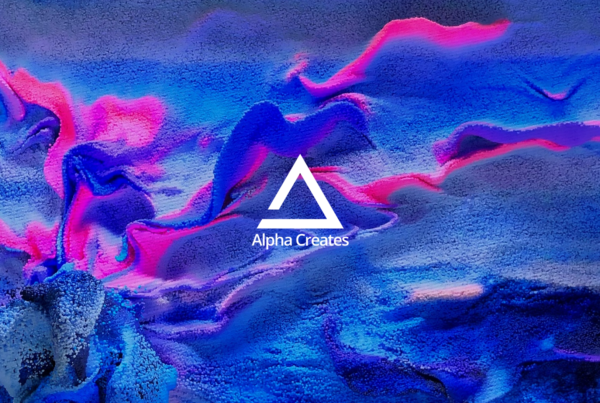 FY21 War for Talent in the Australian Legal Industry 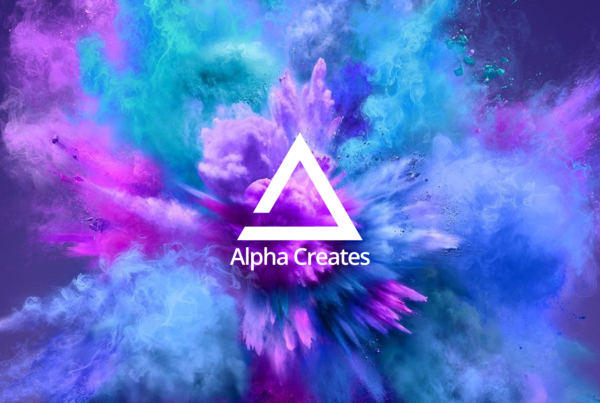 FY20 War for Talent in the Australian Legal Industry 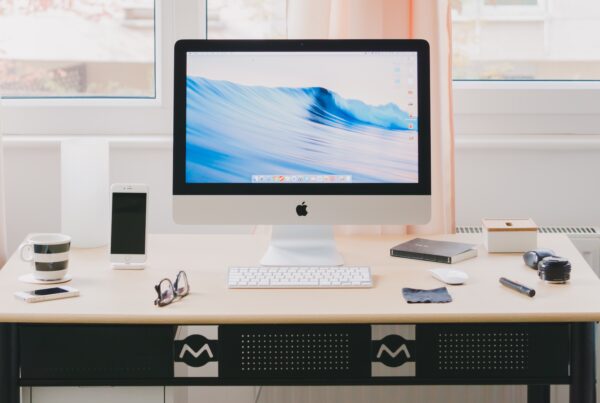